Over the last years, the European victims’ policy has been promoting access to Restorative Justice as a useful tool able to produce positive outcomes by creating a space that is receptive to the victims’ interests, particularly in terms of economic and moral reparation, whose achievement is not entirely guaranteed through criminal proceedings. After long years of experience, this paper aims to analyse and underscore the actions lines set out in the latest Council of Europe legislation, Recommendation CM/Rec(2018)8 on Restorative Justice in Criminal Matters, as well as, on an national level, point out some of the items that might be slowing down the progress of Restorative Justice and Penal Mediation in Spain.

This paper aims to deal briefly with the meaning of so-called Restorative Justice; differentiate it from one of its manifestations, penal mediation (the most relevant and most currently used process, with greater possibilities to be implemented in our criminal justice system in the future); as well as rebut some of the usual objections that the procedural and penal doctrine adhere to when facing the possibility of having our legal system accept this instance in a significant way. We gather that the traditional assumption of ADR (Alternative Dispute Resolutions) should be nuanced in the Spanish Criminal System and opt for the expression Adequate Dispute Resolution, thus assuming this form of penal mediation as integrated into the criminal process and not considered separately as a substitution or alternative.

Power is a fundamental concept to analyse social and relational processes, therefore, it plays a key role in conflicts. The relationship of people involved in a conflict is also influenced by power dynamics, rank and privilege. Using rank and power by the parties in a conflict determines the evolution of the conflict, and they also have an impact on escalation and de-escalation actions, and the mediation or conflict management process. Learning how to integrate and live with diversity means managing rank and power in relationships.

Human diversity might have a significant impact on mediation processes; however, the linear, transformative and narrative models widely used in the West were not created to determine such an influence. Giménez Romero’s Multifactorial Approach is the only methodological tool identifying the diversity of the personal, cultural and situational factors in a mediation process in order to target their influence. For this reason, the question one might ask is: Is it possible to identify the personal, cultural and situational factors that significantly impact a mediation process by integrating Giménez Romero’s Multifactorial Approach into the linear, transformative and narrative models? Results shown that integrating the multifactorial approach to the narrative model was more efficient as it allows to identify the personal, situational and cultural factors linked to how the conflict originated and persisted, as well as the entire communication process and long term relationships.

Since 2003, the author has been practicing, as an integral part of his mediation model for deep-seated interpersonal conflicts, what he thought was the active listening model taught by Carl Rogers. But after many years he discovered that he has been practicing a very positive alteration of the model based on his wrong understanding of Rogers’ seminal book, Client-Centered Therapy (1951). In essence, it is a king of fluid empathic listening in which the mediator does not interrupt an individual’s venting (this takes place during a pre-caucus, with each individual separately). Empathic reflection occurs when the mediator allows the parties to be heard in a non-judgmental way. Being heard in such a manner enables them to see things more clearly and consider how they might have contributed to the conflict. Also, this gives them strength to put pride aside and see the other person in a more positive way. This innovative practice yields valuable results within the context of interpersonal conflicts.

This paper attempts to analyse the impact of the health crisis we are currently going through on the empowerment of voices advocating for the promotion of mediation for conflict resolution. In many cases, and anticipating the increase in litigation, for instance in consumer matters, horizontal property, banking, leases, small claims, modifications of measures, executions in family proceedings, etc., using mediation may contribute to quick and effective resolution between individuals and even professionals. However, the promotion of mediation should not be envisaged exclusively to face this health crisis, but it should be used as a measure that should be maintained in the future to the detriment of the current juridification, contributing, thus, to relieve courts and tribunals, submitted long to a lack of human and material means to face an excessive work load.

One of the fields in which conflict resolution is developing is the Internet where it will, no doubt, become one more tool used to transform conflicts in cases of cross-border disputes and also to achieve the execution of a cross-border agreement within the EU, regardless of the nature of the dispute, whether internet related or not. This article reviews the state of on-line mediation and further defines, according to the legal framework in Spain, what is meant by electronic mediation; also, this paper intends to become a significant resource for legal counsel, institutions, Online Dispute Resolution service providers, governments as well as those with a more academic interest. Undoubtedly, for those who work in the field of peace building and value technology as a tool of it, online dispute resolution is actually an indispensable resource.

In order to establish a correlation of ideas between philosophy and psychology, in relation to the study of the empathic cognitive capability to assume another person perspectives, the possibility is suggested that both the phenomenological intuition and the mental simulation should correspond to phenomena linked to this subtle reflex inferential process, which constantly completes a very limited direct perception capability on our part, that hypothetically fail to comply with the requirements of an psychophysical functioning of an enactive nature. It is also indicated that the appropriate way to operate with process, in order to assimilate approaches that are alternative to our own, would be to deploy it through revived personal evocations of biographical moments equivalent to the way in which the others are «located in the world», revealed through observed stereotypes, in relation to it. Lastly, it is noted that the resistance to accept certain behaviours as our own, generates problems in this regard.

This article shows the importance of good management and use of techniques in family mediation processes, especially in the components of communication, participation, containment of emotions and attitudes consistent with public policies, which allows to optimize the quality indices of Family mediation, a public policy mechanism that is important in family law in Latin America. For which an experimental study was analysed that uses an innovative and validated empirical methodology of qualitative and quantitative type of evaluation of the quality of the family mediators tendered, used during the last seven years by the Ministry of Justice and Human Rights and some Chilean universities. Through which the use of mediating techniques of greater weight is evaluated, in each of the components that make up each stage of the mediation process -especially those of legitimization between the parties, paraphrasing, circular interventions and gender approach in mediation-; variables that have a greater influence on the quality of mediation processes in the area of family law. 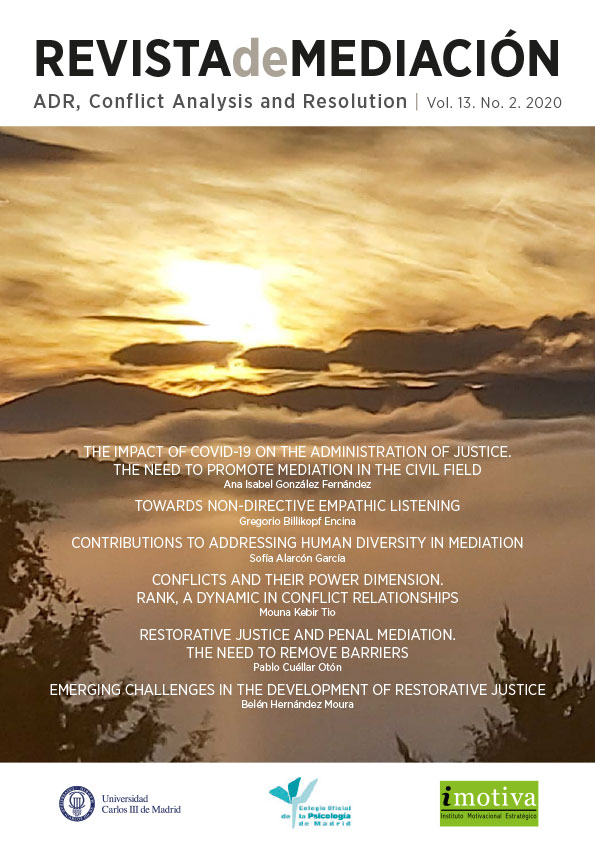 What is Revista de Mediación

It is an academic, biannual, online, and free of charge journal on Mediation and other ADR, of high editorial quality, highlighted relevance and professional interest that encourages scientific study and rigor, best practices and innovation, analysis and positive resolution of conflict through alternative and peaceful ways (ADR). It is addressed to mediators, specialists in conflict analysis, management and resolution, and to those interested in these fields.

What articles are accepted

The “Revista de Mediación” management team considers the best authors and the most updated research projects that might be of interest for the entire mediation practitioners. Having quality papers is, ultimately, the main criterion to decide upon publication. In order to accurately respond to the professional principle this Journal aims at, we consider that it is appropriate to meet some requirements other publications, publication standards and writing books have in order to insure the relevance of the published topics.

How to submit papers

If you wish your article to be assessed for publication by “Revista de Mediación” please send the following documents to the email revistademediacion@imotiva.es templates can be downloaded here.